At the crossroads of Asia and Eastern Europe, between the Black Sea and the Caspian Sea, the Caucasus is a unique travel destination. Few tourists visit this fascinating region but those who do are struck by its beauty, culture and history. On this trip, you’ll pass snow-capped mountains, glaciers and gorges; dine with local families; and explore rock-hewn villages, mosques and UNESCO World Heritage-listed monasteries and churches.

Georgia has an ancient culture and a unique alphabet found nowhere else in the world. Over the centuries all her neighbours have coveted her land. Turks, Persians, Mongols, Arabia, and the Russians have invaded and periodical civil war has also left its mark. But nowadays, it is a peaceful country becoming known for its quality wines and spectacular scenery. The capital, Tbilisi, has a modern European vibe, with cosy cafes, art galleries and theatres. Yet, leave the city and it may feel like travelling in medieval times, amongst palaces, castles, fortresses, and rock-hewn villages. The UNESCO World Heritage-listed ancient capital Mtskheta sits at the confluence of the Aragvi River, and its 11th-century Svetitskhoveli Cathedral is where Christ’s robe was buried. Admire the views of snow-capped mountains, gorges and glaciers as we travel through the country and the higher Caucasus Mountain range, reaching heights of over 5,000 metres.

This fascinating region has been overlooked by travellers for too long – now is the time to visit, as it emerges as a destination for adventurous travellers. 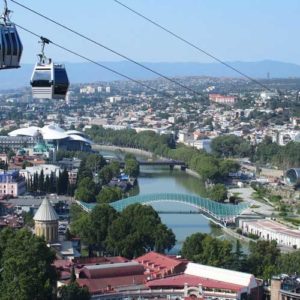